Baucom pulls away to win Future Masters 10-under title

The Hickory, N.C., resident fired an even-par second round and pulled away to a five-stroke victory in the Press Thornton Future Masters 10-under age division.

Baucom took a one-shot lead after Monday’s first nine-hole round, a 2-under-par 33 on the front nine. On Tuesday’s back side, he hit clutch shots at key times and avoided big numbers that hurt his playing partners and allowed him to pull away.

Baucom finished the tournament with a 2-under-par 68 total. He won by five shots over Cavin Hall of Moultrie, Ga., who shot a 73. Two shots further back were Jude Desmond of Pompano Beach, Fla., and Maxwell Morgan of Jacksonville Beach, Fla.

That he did it in front of extended family was a bonus. Buddy and Janice Jones, longtime Dothan residents, are Baucom’s maternal grandparents. The champion had his own parents, Mark and Jennifer Baucom, and extended some family cheering him on.

“I thank my grandparents for letting me stay at their house,” Baucom said. “My 5-year-old cousin, Trent Jones, watched me both days. I’m glad my mom and dad and my grandparents and cousins came to watch me.”

They saw a good show. He started the round with a one-shot lead over playing partners Hall and Morgan. Cyrus Joseph of Melbourne, Fla., also played in the final foursome.

Hall pulled back within a shot when he birdied the 12{sup}th{/sup} hole.

Baucom made a clutch nine-foot par putt that kept his lead at one shot on No. 13. He excitedly pumped his fist when he saw the putt fall.

“It was pretty big because he (Hall) had just birdied the last hole,” Baucom said. “That meant I was just one up. He was in with a par and was like, ‘I’ve got to make this.’”

The next two holes allowed him to pull away.

Hall, his closest pursuer, pulled his approach shot into the ditch left of the green.

“I had 111 yards in and when Cavin went left, I said, ‘OK Grayson, focus. Don’t get too excited. Just put it in the middle of the green.’ And I had a 22-footer left and two-putted.”

He called 15 an even bigger hole. He was over the green and in a bunker in two shots, facing a downhill sand shot.

“I chipped it with a lob wedge and hit it to a foot and saved par there,” he said.

His lead wasn’t threatened after that point.

His father, Mark Baucom, said he “broke down” as it set in that his son was going to win the tournament.

“We were here last year and we weren’t quite there yet, you know?” grandfather Buddy Jones said. “This was really special to us, it really was. He’s a really good kid.

“He came down here and stayed with us about two weeks. Me and my wife were born and raised here. His mother, Jennifer, was born here in Dothan, also. We had to move in 1985 for a job with the airlines. She grew up in Memphis and she married Mark and they live in Hickory, N.C.”

Mark Baucom said Grayson’s 76th tournament will be next weekend in Pinehurst, N.C. He said the fine play and sportsmanship of the final round was impressive.

“Those three have been beyond supportive of us and us trying to come down here a few times a year, like when we’re down here at Christmas time,” Mark Baucom said. “The hospitality from them and Lyn Thornton met us yesterday and talked to us. It’s the most unbelievable group of people and marshals we’ve ever been around.”

Zachary Felton of Estero, Fla., won the Bill Maddox Award — which annually is presented to the 10-under golfer who improves the most from the first round to the second. Felton shot a 46 on Tuesday, an eight-stroke improvement from Monday’s 54.

Grayson fired an even-par 72 final round to finish the Wexford Plantation Intercollegiate fourth overall, while the Zips completed the first spring tournament 16th overall (+57, 313-308-300 – 921). Grayson defeated three GolfStat Top 100 players in South Carolina Aiken’s Dan Sheehan (72nd) and August Lindvall (74th) along with 96-ranked Jack Lang from Davidson with rounds of 71-72-72 for a 215 (-1) 54-hole performance. Grayson used 10 pars and three birdies mixed with three bogeys for the even-slate total. He led the Akron men’s golf team through the initial 36 holes by posting a third-best 143 (-1) on rounds of 71 (-1) and 72 (E). He carded 13 pars scores with three birdies and two bogeys during the first 18-hole round, and nine pars, five Birdies, three bogeys and a double bogey in round two. For the tournament, Grayson notched 34 pars, 11 birdies, eight bogeys and a double bogey.

Since 2004, U.S. Kids Golf has honored the best youth golf teachers with the Top 50 Kids Teacher Award. Applicants complete an online survey and winners are chosen based on their contributions to youth golf, such as: experience young golfers; time devoted to teaching youth; innovation, creativity and fun in their programs; communication; parental involvement; use of a well-organized instruction program and overall effort to grow the game.

Each year, award recipients include teachers who work at public, private, resort and municipal courses.

“The teachers and coaches who win this award play an important part in our corporate mission to make the game of golf for kids,” said Dan Van Horn, President and CEO of U.S. Kids Golf. “Our goal in recognizing these youth golf coaches is to bot recognize their accomplishments and also to help parents find quality golf instruction for their kids.” 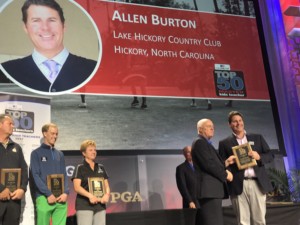 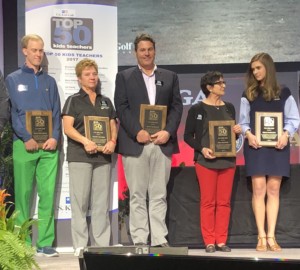 Sophomore Elliott Grayson opened the 2016 Firestone Invitational with a first round 8-under par performance, leading the Akron men’s golf team to second place with 564 (-12) team score at Firestone Country Club on Monday. The 12-under par team score is the second best in program history behind a pair of 13-under performances in 2006-2007.

Sophomore Elliott Grayson continued to lead the Zips’ scoring efforts at the Bearcat Invitational, firing a final round 2-under par 69 en route to a 297 (+13) final team score on Tuesday. Grayson tied for 12th overall on the leaderboard with a 216 (+3) 54-hole total, while Akron finished ninth in team scoring, 894 (+42), at Coldstream Country Club, a par-71 course that stretches 7,150-yards.

Elliott Grayson successfully defended his crown at the Cleveland County Amateur Tournament. He held held off Kings Mountain High sophomore Pierce Robinson by one stroke to retain possession of the Richard Shelton Memorial Championship Trophy. Grayson was under par both of the first two days of the tournament and had a final round 74 to finish at 5-under 211 for the 54-hole tournament.